Hi and welcome back to our blog!

Design patterns should be used in order to have clearly structured code. A lot of design patterns exist such as "Singleton", "Factory Method", "Abstract Factory" or "Decorator". In our opinion, the following websites give a good introduction into the design pattern topic:
- https://www.oodesign.com
- https://www.philipphauer.de/study/se/design-pattern.php

Note: As our class diagram grew by a lot within the last months, it is not really readable in the preview below anymore. By opening the image in a new tab, it might become more readable.

The use of design patterns in our project

Creates objects without exposing the instantiation logic to the client and Refers to the newly created object through a common interface. (oodesign.com)

The tower defense app makes use of three interfaces so far.

Concerning the naming style for our project, all interfaces start with an "I" and all abstract classes start with an "A" to immediately recognize the type of those classes. Especially, this convention simplifies reading outside of Android Studio, e.g. on GitHub.

Offers the interface for creating a family of related objects, without explicitly specifying their classes. (oodesign.com)

Abstraction is one of the most important design patterns in the tower defense game. It is used in many parts of the project. In this section, we want to point out the most interesting usages of abstraction.

"AMatch", "AWave", "AMenu" and "ATimerUsage" are more examples of abstraction in our project and the whole structure of using this design pattern enables us to create and adjust new implementations of all those types, which is a very big advantage when adding new features or adjusting consisting features for more than one implementation. As a result, it reduces the amount of code massively.

reuses and shares objects that are expensive to create. (oodesign.com)

In an earlier state of our project, we had a class called "ObjectStorage". In this class, all needed object-instances for keeping the app operating have been maintained (e.g. GameActivity, Game, MatchField and many more). Some weeks/months ago, this was a very easy-to-use solution but performance intensive as well because the Android framework is not designed for holding a lot of instances which are not permanently necessary. Because this design pattern is not suitable for our project anymore, we got rid of it in the beginning of the 4th semester.

Summarizing, we can conclude that design patterns are already used in our project from the beginning of development, which probably enables us to develop new features comparatively quickly. Because of some restrictions due to our framework and the requirements of the app itself, we are not trying to apply as many design patterns as possible and stick to the patterns which suit best to our project.

Last sprint we implemented of course some new features. As our planned UCs are already implemented we worked this week on new Towers. We think this is currently the most important part, because towers with different special effects allow the player to think about tactical methods to play the game and defeat especially the hard waves. Maybe you have seen our first Tower in previous pictures and clips. We call it Artillery and it includes the basics we expect of a tower. It simply shoots with one bullet at one enemy which is located in the range of the Tower.

The second tower is called "Freezer" which comes with the ability to freeze enemies. It makes less damage but slows a hitted enemy down for a few seconds. The slowness effect decreases continuously and after some time the enemy gets back to its full speed. For moving the enemies, we use simple timertasks. But here we had to improvise a little bit and our solution is about a timertask which works recursively by calling itself with a specific delay that decreases with every movement of the enemy, so this effect disappears in a smooth way. The Bullet is visible as a little snowflake. 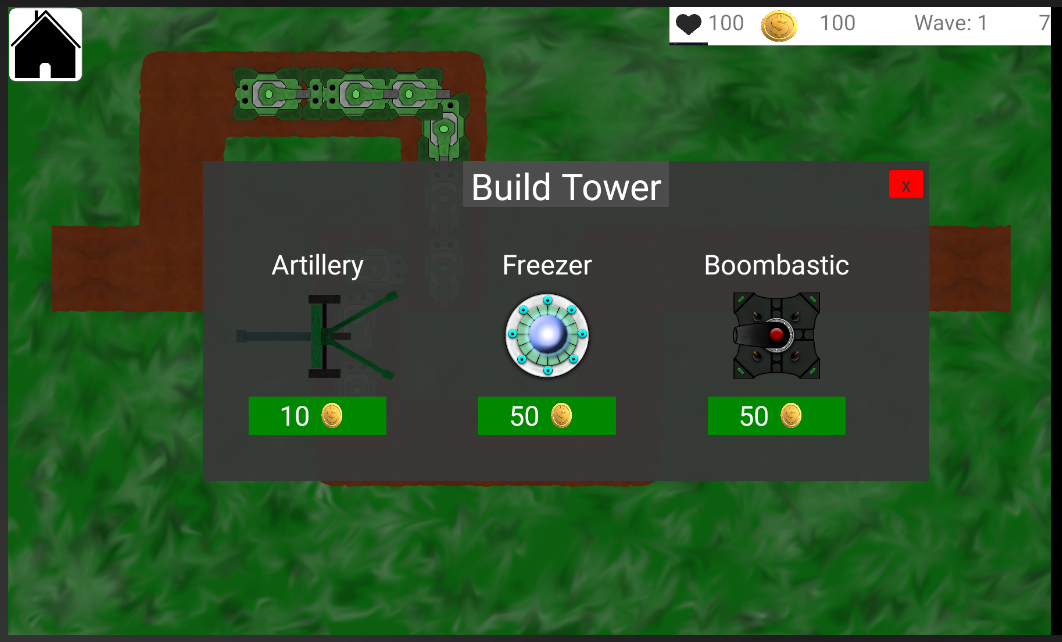 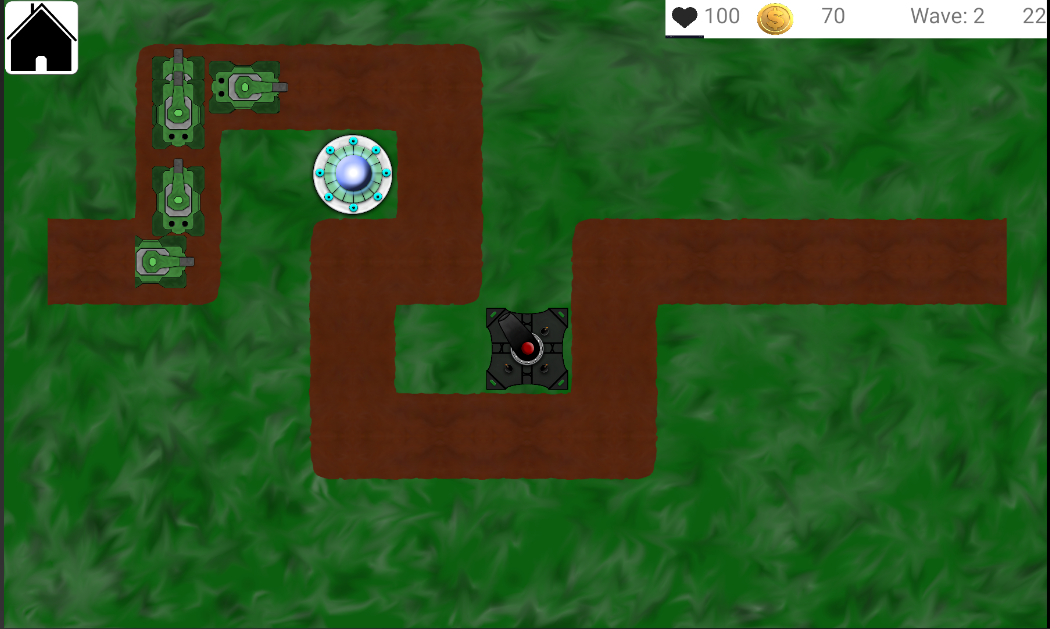 "Boombastic" builds the third tower and lives up to its name. It shoots with a canon ball that causes area damage in a given range. The tower focuses at one enemy but the canon ball will end in an explosion which causes damage to near enemies. Of course the damage decreases according to the distance an enemy has to the explosion.

We mentioned that we use a lot of abstract classes. Here we had a big benefit and were able to implement these towers and their bullets within a few hours and little code because we only had to extend the normal behavior by the special effects. So we are already working on more towers. Be Excited!