Metrics - what is that?

This week, we are dealing with metrics. For analyzing our metrics, we make use of an Android Studio plugin/tool called "Metrics-Reloaded". This plugin offers a lot of possibilities to analyze the metrics of a project.

In particular, we want to deal with three metrics this week: Cyclomatic Complexity (CYC), JUnit Test Metric and JavaDocs Coverage Metric. Explanations to those metrics and refactoring examples in our project follow below.

The cyclomatic complexity measures the complexity of code. For this, the code is structured into a flow graph diagram. In this diagram, edges, nodes and exit points are counted and calculated into the complexity value. On the website tutorialspoint.com, "What is Cyclomatic Complexity?" is explained very well.

(Open the screenshots in a new tab for better resolution.) 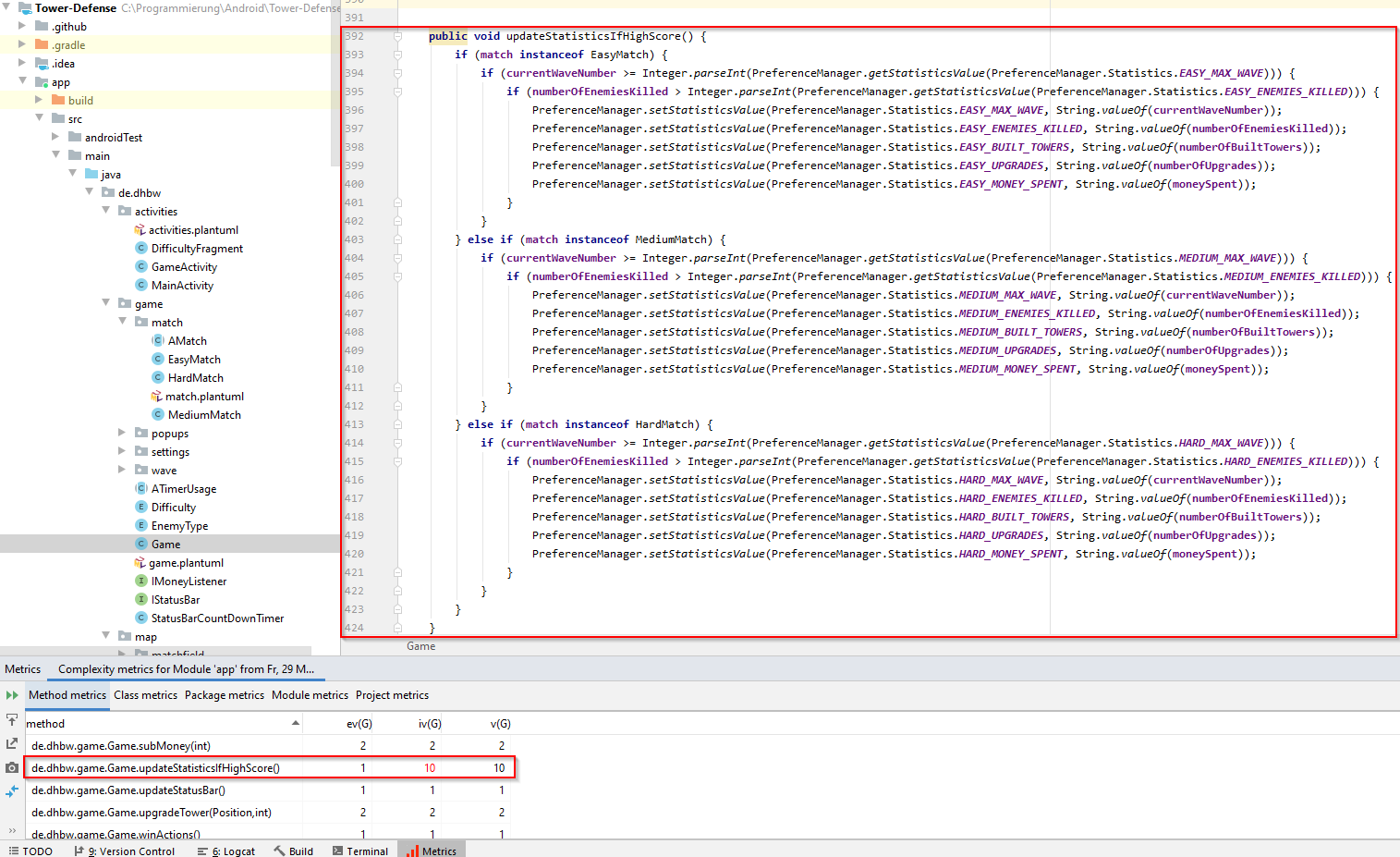 The "updateStatisticsIfHighScore()" method will update the high score for the currently played game-difficulty if the scores of the current game are higher than the saved high scores.

Before refactoring, the difficulty of the match had to be determined by checking the type of the match using "instanceof". According to the defined difficulty, the new score got saved by the explicitly defined key (e.g. EASY_MAX_WAVES, MEDIUM_ENEMIES_KILLED, ...). In fact, always the same code was runned using different keys for saving the values.

After refactoring, we pass on the difficulty of a match as well as the required high score type to a method which generates the needed keys for saving the score values. This way, we are able to save up about two thirds of code when looking at the updateStatisticsIfHighScore method.

Probably, this solution still can be improved but it shows pretty well how the cyclomatic complexity can be reduced by a lot.

You can also check out our corresponding commit for all changes concerning this metric-refactoring. 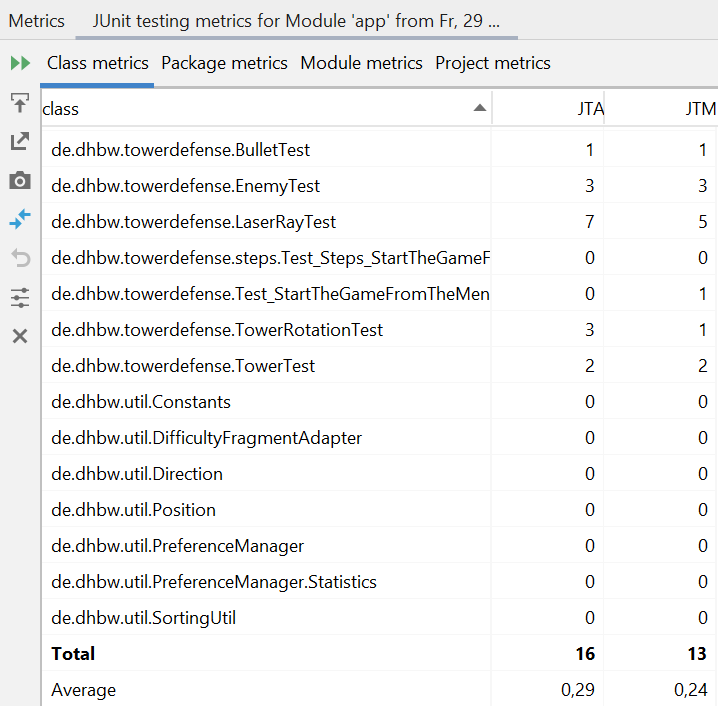 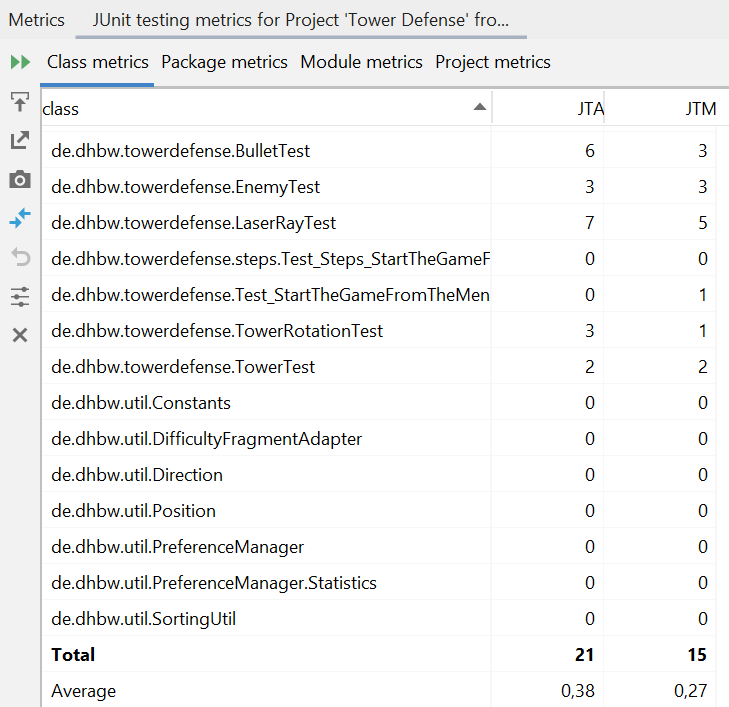 In particular, we created some more JUnit tests in order to cover most implementations of our tower-shooting-functionalities.

Resulting, one can say that the higher those values, the better the test coverage and the metric values.

As a third metric, we want to introduce into the JavaDocs Coverage Metric. This metric is a very simple one and points out which parts of code still need some documentation. Those values can be generated in total as well as in percentage (see screenshots below).

In our project, we strictly followed some rules of clean code from the beginning and named methods most often meaningfully. Because of that, JavaDocs were redundant. In order to show to you how this metric works, you can find a comparison of before/after code below. 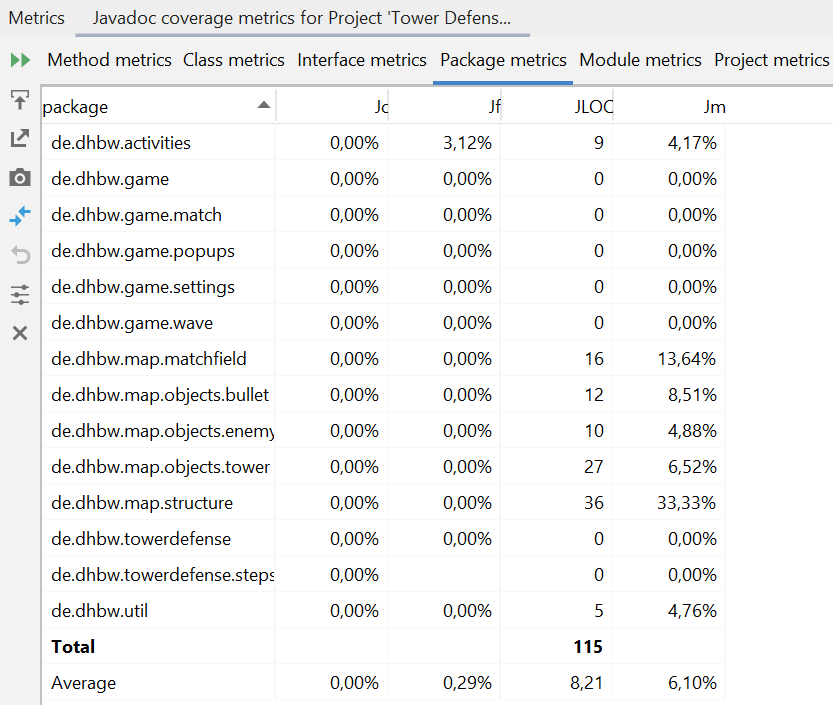 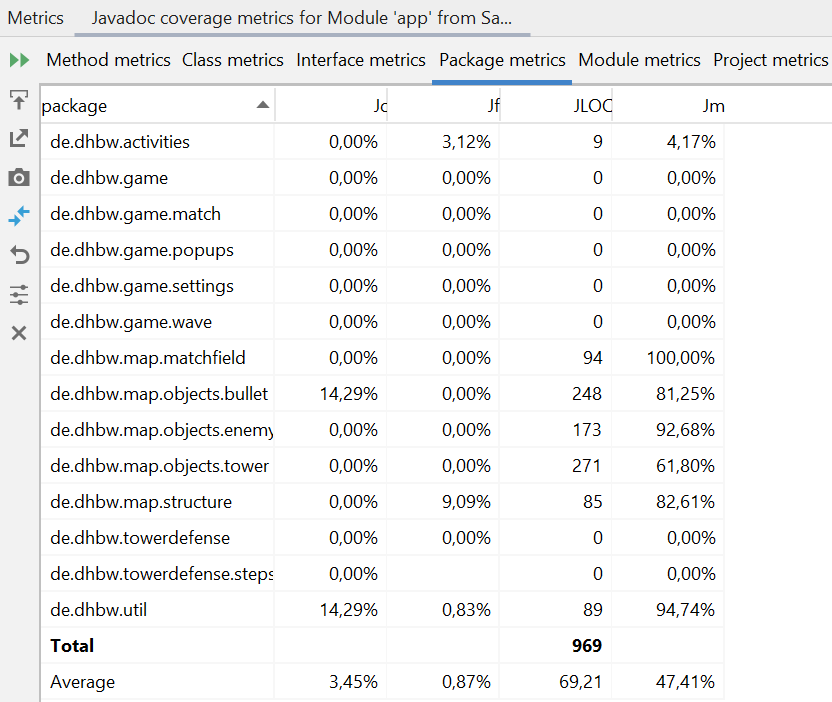 The corresponding commit can be viewed on GitHub as well.

As one can see, our average Javadoc coverage (right column) increased from 6.1% to 47.41% while adding JavaDocs for about the half of all methods/packages.

In the metric overview, it is pretty useful to see what packages/classes/methods/interfaces still need some JavaDocs.

All in all, this metric is not that important in our case but probably, it is a nice example to demonstrate because of its easy way of increasing quality.

Code which is not going to be refactored 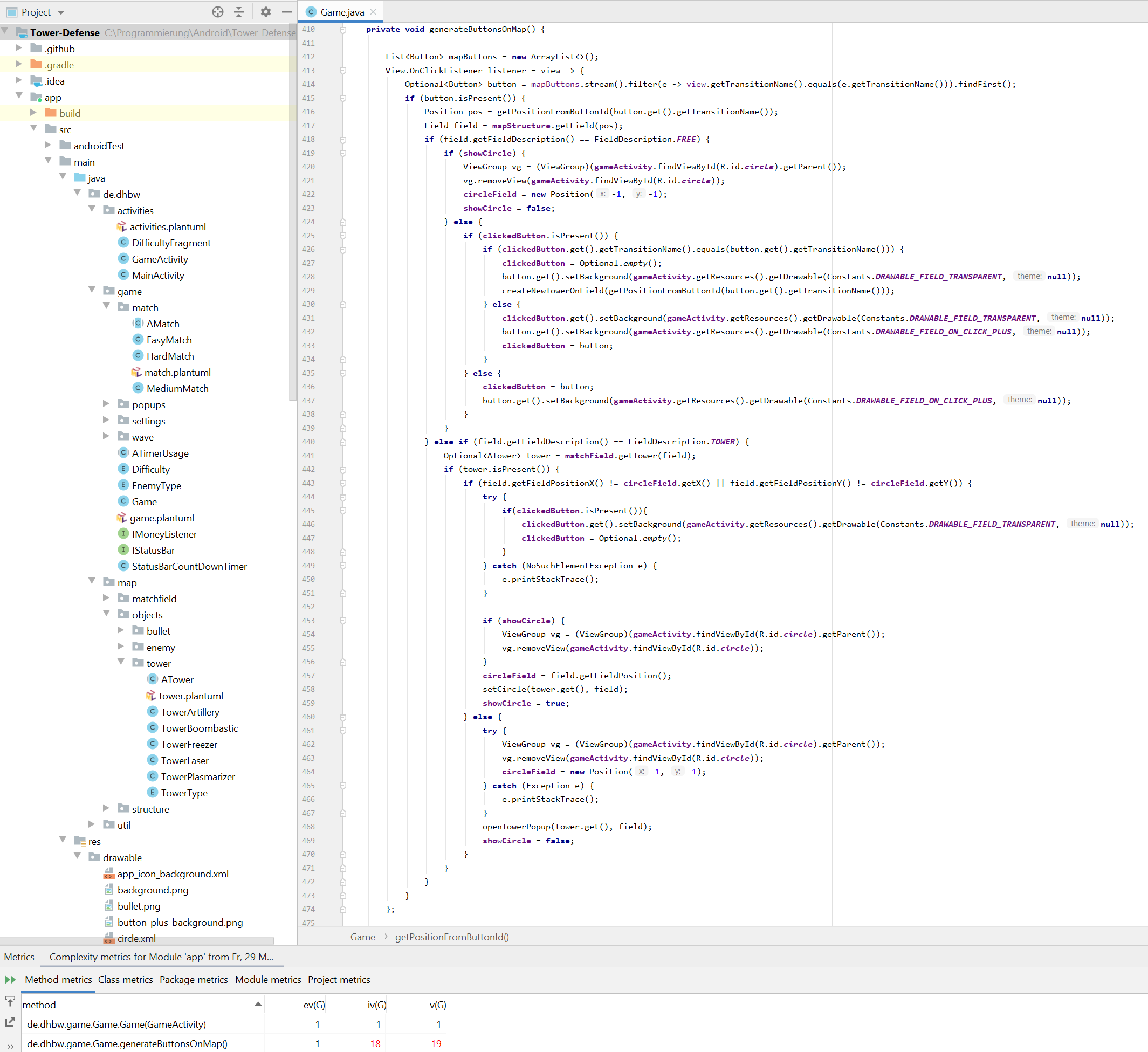 Above, you can see our example of code which is not going to be refactored in order to reduce its complexity value of 19.

The "generateButtonsOnMap()" method is responsible for generating the field structure. It is one of our most fundamental game engine methods which is never going to be touched anymore because the time needed for refactoring the method is disproportionate to the profit. The method works fine and we have not seen any bugs in the past.

All in all, we can summarize that metrics can help to find weak code spots in general. On the other hand, code snippets highlighted by the tool need to be analyzed by a developer first in order to decide whether the metrics should be improved or not.

In our case, the metrics analysis is only performed locally because most common metrics do not fit very well into the style of programming in the Android framework. As we do have our own conventions which are adapted to programming Android apps, this decision is okay in our opinion.

Big Progress in our CI/CD

Beside the use of metrics, a good CI/CD (Continuous Integration / Continuous Delivery) pipeline becomes more and more important.

Until now, our CI was not really good. Instead of setting up a good CI tool (such as Jenkins or Travis), we used the GitHub Actions functionality where we have set up an Android CI with a third party tool. Though the tool built and tested the tower defense project, it acted as a black box and nobody was able to have a closer look into what is going on there. Of course, we could have done this better earlier, but as our team wanted to push ahead the progress of the tower defense game first and as nobody of us had any experience with CI/CD tools, the previous solution was obviously the best one for us. But now, this changed!

Introduction into our use of TravisCI

TravisCI is one of the most popular tools when talking about CI/CD. This is actually the reason for why we decided on using this tool from now.

After a lot of hours dealing with getting Travis to build our Android application, we finally managed to have an CI which does the following:

As you might imagine, this is a big step for us and enables a lot of possibilities in the future (e.g. automatic deployment of the app to Google Play Store).

Of course, all those new information are added in our testplan document on GitHub which also contains a badge with the current build-status of our app such as the following:

A recently added tower is called Plasmarizer. The Plasmarizer is a tower with a special shooting mechanism. It shoots a PlasmaBall onto the nearest targetable enemy in range. As soon as the PlasmaBall hits the targeted enemy, the bullet can jump to other enemies in a specific range. With each further hit enemy, the damage of the ball decreases.

Another new tower is called Assaultlaser. This tower does not shoot a typical bullet as all other towers. As the name already says, the Assaultlaser creates a LaserRay. The LaserRay focuses the nearest enemy in range and shoots as long as the targeted enemy is damaged by the LaserRay. If the enemy moves our of the LaserRay or if it becomes killed, the AssaultLaser will stop shooting and searches for the next enemy. If not explicitly targeted enemies move into the LaserRay, those enemies will also be damaged.

To be honest, this tower can become very strong when positioning the tower cleverly. Due to this fact, the game balancing (which will come up very soon) needs to be done carefully.

Because pictures cannot demonstrate the whole progress up to now, we uploaded our current app to appetize.io so that you can play by yourself, if you want. Here is the link: https://appetize.io/app/w4nbd746n40k2wajrfzp03vpuc

All in all, we are happy again to present so many new stuff to you. Beside the progress in the game itself, we managed to make use of metrics and we set up a well working CI. In fact, this means that most requirements of a good software engineering project are fulfilled and we can focus on the following tasks from now:

That's it for now. See you next week!