This week, we created some narratives to our use-cases, which we specificated in the last week.

Using the gherkin syntax, our narratives look like this:

UC: Start The Game From The Menu 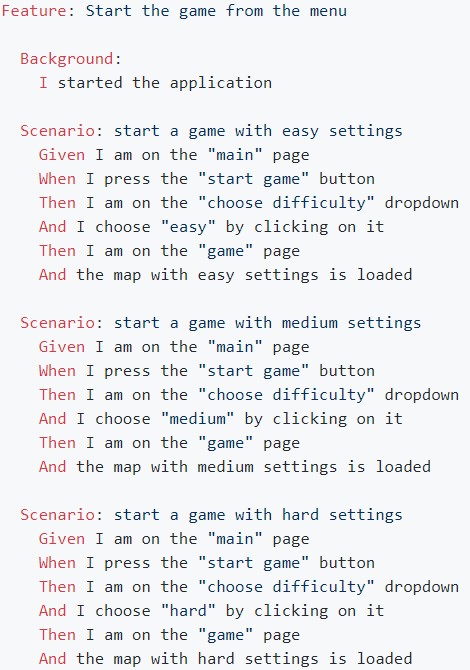 On 1st december 2019, we managed to be able to run feature files.

Because Tower Defense is an Android-app, we had to search for a possibility to integrate cucumber/gherkin into Android Studio.
In the beginning, we tried to run feature-file-tests the basic way using "Cucumber for Java", "Gherkin" and JUnit. After hours of research and testing, we were not able to get cucumber running the basic way because of several errors (for which not even stackoverflow had a useful solution).

Researching even more, our team got to know Espresso (Android-UI-testing) and GreenCoffee (Android library which combines cucumber and espresso). Using this library, we finally could automate our first feature file which starts the game from the menu. At the moment, we cannot implement feature-file-tests for other use cases because those are not fully developed yet.

In the following video, you can see our first successful ui-test.